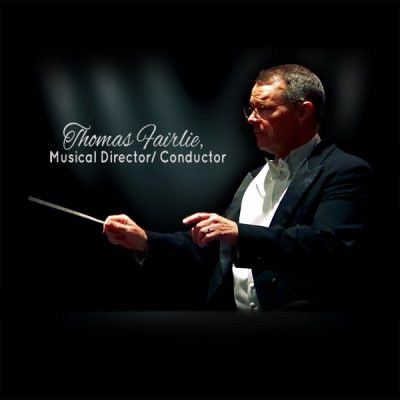 Thomas Fairlie is the founding Musical Director/Conductor of the Temple Symphony Orchestra (TSO) and has led the orchestra since its inception. He was instrumental in developing the board of directors in 1994 and continues to assist the board in long-range planning, fundraising, public relations and artistic development. Concurrent to his work with the TSO, Mr. Fairlie served as Director of the Division of Fine Arts at Temple College. In May of 2016 and after more than 25 years of service to the institution, Mr. Fairlie retired.

Mr. Fairlie was the co-founder and musical director of the Larimer Youth Festival Orchestra in Ft. Collins, Colorado (now the Youth Orchestra of the Rockies) and was the musical director and conductor of that organization for five seasons. Mr. Fairlie has also guest conducted the Youth Orchestra of the Rockies and conducted the Louisiana All-State Orchestra in November 2007. He has guest conducted professional orchestras in Ft. Collins, Colorado and Lake Charles, Louisiana.

Mr. Fairlie and his wife, Mary, have resided in Temple since 1990 but also have a home in Ohio.